Combining the old with the new, this SMACNA contractor worked with refurbished copper elements and duplicates of original pieces to help bring back the magnificence of the eastern façade of the historic Hoboken Ferry Terminal in Hoboken, N.J.

Schtiller & Plevy Inc., of Newark, N.J., which specializes in historic restoration, has completed the latest of its projects in the ferry restoration: Phase II Exterior Restoration of Hoboken Ferry Terminal. The $11 million project called for a complete restoration and replacement of copper elements on the exterior of the ferry slips.

Using over 100,000 pounds of copper and 25,000 pounds of stainless steel bars for the fabrication and installation of elements on six slips, Schtiller & Plevy followed the methods described in the sixth edition of SMACNA’s Architectural Sheet Metal Manual in the restoration of historic cornice elements.

In addition to fabricating and providing mockups in the field for every element of this project from fabrication to rehabilitation and replication of the copper work, Schtiller & Plevy took on the responsibility of installing the historic copper windows, cast aluminum balconettes and the rehabilitation of the existing concrete substrate.

One of the many major challenges for the company was to replace the aesthetic copper elements that were attached to the concrete walls and were falling off the building for various reasons. The original concrete, ferrous fasteners and ferrous armatures failed. The concrete disintegrated due to the coal ash in the mix and turned to dust. The ferrous material failed due to electrolytic reaction between the copper and the ferrous material and the close proximity to salt water and humidity. Wood supports deteriorated and ferrous wire supports also failed. In fact, for the last 35 years various pieces of copper had fallen from the east façade and were lost forever in the Hudson River. The consistent loss of replication copper elements had to be factored into the bid process.

The concrete construction was used when the 1907 building was rebuilt after burning down twice. The construction documents specified that any of the copper elements to be reused and reinstalled must last for the next 100 years; otherwise, the pieces would have to be replicated.

Adhering to a strict project schedule, Schtiller & Plevy employed workers from the SMWIA Local Union No. 25 for 18 months with work planned in a sequence. The workers installed new and old refurbished copper on the new substrate, consisting of concrete and ¼-inch by 2-inch stainless steel armatures (structural ironwork). The design team structural engineer required this abnormal thickness of the armatures to prevent any wind uplift of the existing 100-year-old copper and of the new copper.

Schtiller & Plevy, established in 1920, has had a long association with the restoration of the ferry terminal. Lawrence Plevy, president of the firm, visited the site in the 1960s when he was a high school intern for the company. His grandfather, who was president of Schtiller & Plevy at the time, along with his father and uncle, brought him to the ferry terminal to witness the pre-bid process for the copper removal and probe investigation project.

Plevy’s grandfather gave him “words of wisdom,” including the statement that whoever secured this contract for this phase of work along the east façade of the terminal would inevitably land the “large-scale project.” Although Schtilller & Plevy did not secure the contract to perform the exploratory problem phase, the company was involved in every future bid process and was hired for six historic restoration projects for the ferry terminal. 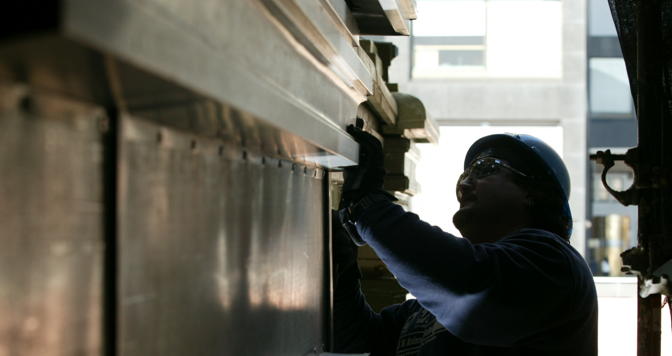 Architect: Architectural Resources Group, San Francisco, Calif. Sheet Metal Contractor: Crown Sheet Metal and Skylights, Brisbane, Calif. When it opened in 1926, the Mark Hopkins Hotel was described as “architecturally perfect and flawless.” The hotel recently received a $10 million exterior restoration that returned the landmark structure to its former state of perfection. Based on … END_OF_DOCUMENT_TOKEN_TO_BE_REPLACED